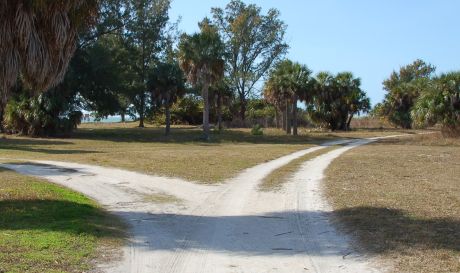 John Boyd was one of five children, raised by a poor single mom. But she was tough, a characteristic he developed too. This straight-shooter became “the fighter pilot who changed the art of war.”

The two of us know him best for developing OODA loops which, in our opinion, is the planning model for today’s entrepreneur.

He became a colonel in the Air Force, an instructor, and a man who

abhorred incompetence. He often got into arguments with his superiors.

He would have been kicked out of the military except for one thing – he was usually on the right side of the argument.

The fork in the road

So in case you’re not familiar with it, we want to share with you his “fork in the road” speech. It’s one of the single most practical pieces of advice we’ve ever seen or heard.

He would tell his charges: “A day will come when you will face a fork in the road. You will have to make a decision about which way you go.”

Putting his left arm down and pointing to the right, he said, “Or you can go that way and you can do something – something for your country and for your Air Force and for yourself.

He continued, “If you decide you want to do something, you may not get promoted and you may not get good assignments, and you certainly will not be the favorite of your superiors. But you won’t have to compromise yourself. You will be true to your friends and to yourself. And your work will make a difference. To be somebody or to do something. In life there is often a roll call. That’s when you will have to make a decision. To be or to do? Which way will you go?”

Boyd’s right. We all face this choice.

Fame and fortune are the “linchpins” of the New American Dream. Apparently more people think it is more important to be somebody than to do something.

In the pursuit of fame and fortune, many of these same people will walk all over anyone and everyone. They will do anything and everything they have to do for glory.

But status gained in this manner often leads to a certain feeling of emptiness inside. These people often end up divorced, with bad children, and go to jail.

In many cases, we see people being hurt in the name of profit. It’s small-minded thinking to think of it in an either/or way.

That’s not the entrepreneurs mindset. As a BIGG goal-getter, you realize that without people, there will be no profit.

Gains made at the expense of people will be short-lived. There has to be a better way…

And there is! Instead of trying to be somebody, you can do something. You can seek excellence instead of glory.

You can adopt the entrepreneur’s mindset. You can focus on adding value in the lives of others. You can solve a problem for a select group of people.

If you do it well, you will be rewarded – perhaps even with fame and fortune. But that’s not your focus – it’s a by-product.

You focus on doing something. Like an artist, you start with a blank canvas. You create something from nothing, a great work that pleases many.

You can become a difference-maker. You can serve your fellow human beings. You can lift them up instead of tearing them down.

When you do this, they will eventually lift you up. That’s how you become a BIGG success instead of a fleeting success.

You may find your BIGG opportunity in an organization which shares your values. As a corporate entrepreneur, you can make a difference from the inside out.

You may create your own gig. More and more people are doing it – finding ways to make a life, not just a living.

Are you a doer? Then check out our life planning guide, Your Stairway to BIGG Success. Of course, Premium Members have full access to this Guide as well as all the other Guides and Tutorials!

You were born to do something great. So stop trying and start doing it.

That’s not good enough. If it was, you would have already accomplished it. You have to give it your all.

To fulfill your purpose, you must grow personally and professionally. Of course, that’s why you’re here.

You will be tested. Temptations will pop up.

As we write this, it’s Sunday afternoon. A bunch of our friends have gotten together for an impromptu celebration. We’ve been invited.

It sounds fun. More fun than work. But it’s not congruent with our goals. We need to do something today! So we have to say no.

Bob Lefsetz is an amazing writer who challenges up-and-coming musicians to refine their craft. He’s a BIGG fan of Howard Stern.

No matter what you may think of Howard, you have to agree he is a giant among giants. Bob helps us understand why:

Robert Kraft, who owns the New England Patriots, invited Howard to sit in the owner’s box at an upcoming game. Howard said no.

His reason? He’d be up too late and his show would suffer.

But that’s play. What about work?

Howard received an offer which would only require a day a week of work plus some late nights. Howard said no because it would affect the show negatively.

Do you see a theme here? Howard reasoned that…

“He needed to be alone, each night before going on the air, to look in the mirror, be in his own cocoon, run ideas through his head, be alone with his anxiety, so he could deliver the next morning.”

It reminded us of a poem:

How to be a Champion
by Grantland Rice

You wonder how they do it and you look to see the knack,
You watch the foot in action, or the shoulder, or the back,
But when you spot the answer where the higher glamours lurk,
You’ll find that moving up the laurel covered spire,
That the most of it is practice and the rest of it is work.”

That’s right – work! It’s not popular to say in an age when many people think they are entitled to instant celebrity and riches.

The great ones know it doesn’t happen that way. It takes practice. It requires work. It demands focus. But it leads to BIGG success!

What do you think? What does it take to do something BIGG?